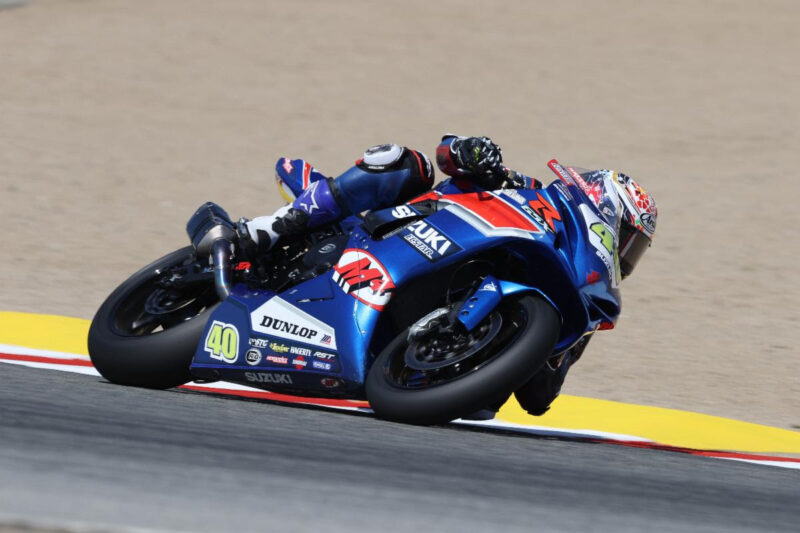 Team Hammer extended its storming mid-season form, snaring another race victory and a pair of podiums as the 2021 MotoAmerica AMA/FIM North American Road Racing Championship season picked back up on Saturday at Weathertech Raceway Laguna Seca in Monterey, California.

It came as no surprise that the win was scored by the surging Sean Dylan Kelly aboard his M4 ECSTAR Suzuki GSX-R600 in the day’s MotoAmerica Supersport contest.

‘SDK’ followed his typical script, leading from pole and fighting off an intense challenge to claim the checkered flag by a narrow 0.099-second. Despite feeling the pressure from close behind throughout, the Floridian only saw his rival come alongside on a single occasion on lap 14 of 19. Kelly countered immediately, striking back in the very next corner before keeping his opponent corralled behind him for the remainder of the race.

The win was Kelly’s third in succession and sixth overall in 2021, extending his championship advantage beyond a race at 26 points.

He said, “It feels so good to win again at Laguna Seca. It was definitely a hard race… The lap times have been really close and I knew it was going to be a tough race. It was close, but we’re here to show we can fight it out and win. A huge thanks to my M4 ECSTAR Suzuki team for getting my bike ready to go.”

Kelly was joined in celebration by his M4 ECSTAR Suzuki teammate, Cameron Petersen. The South African, who earned his maiden MotoAmerica Superbike podium just five races back, already boasts a career tally of four thanks to another standout performance on Saturday.

Petersen suffered off the line despite his front-row grid position, dropping to fifth in the early stages of the race. However, an early red flag provided him another opportunity and he made the most of it. Petersen got away in second aboard his GSX-R1000 Superbike and quickly settled into third, where he would remain to the race’s conclusion.

“For sure, that red flag played to my advantage, big time,” Petersen said. “I got such a horrible start that first time and I could see the front three guys getting away. I was getting a little bit frustrated, but I made up for it on the restart. I managed to get a good start and put in a good race.

“Hats off to the M4 ECSTAR Suzuki team. They keep working hard and keep giving me the best possible bike every weekend. That’s allowing me to show that I can do my thing and get on the podium in the Superbike class.”

All five riders will be back in action and clawing for top positions on Sunday at WeatherTech Raceway Laguna Seca.