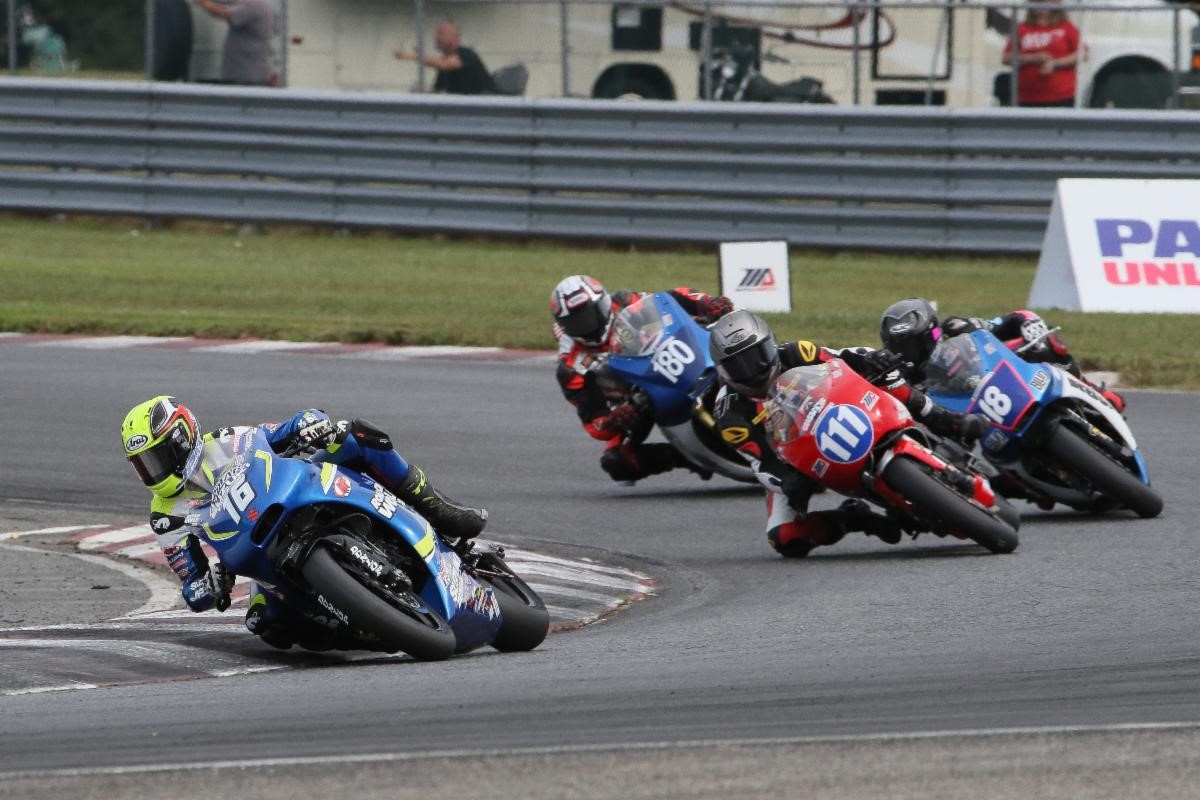 In the MotoAmerica Supersport class, Fong earned his 12th top-two finish of the season with a calculated ride on his Suzuki GSX-R600.

Following an early red flag, the Californian took the holeshot on the restart, but was passed at the end of the opening lap and then ran a close second for the remainder of the race, Fong weighed up his options from that position, applying heavy pressure on the leader as he stalked and considered the risk/reward ratio of a desperate last-lap bid for the win.

Fong charged up on the inside on the final lap, but didn’t have quite enough room to sneak through. He regrouped and made one last try, with a superior exit out of the race’s final corner.

He just about pulled it off, coming up only 0.028-second short of stealing away the win at the flag.

As a result, Fong will enter the season finale with a 10-point advantage and two races left to decide the championship.

Both riders use Domino Grips available at G2 Ergonomics, and Domino Throttles, giving them the ultimate edge.

Fong said, “It’s not easy to be in the championship hunt and ride on the limit for race wins at the same time. I knew I didn’t have the pace to lead the thing and win from the front… I knew I’d get passed in the last corner. So I did my best to stay right there in second and see what I could do. I really wanted to take a lot more chances, but I knew we were on the edge and the championship is on the line.

“I’m really looking forward to Barber. I’ve always done well there in years past on quite a few different bikes so I’m looking forward to going to the final two races at a track I excel at. I’m not happy with second today, but I’m happy to get these points and go into the finale with the lead.”

Unfortunately, Fong’s Team M4 ECSTAR Suzuki teammate Sean Dylan Kelly saw his rookie-season podium streak end at three. The 17-year-old rising star was again battling for a top-three finish but was knocked down and out of the race after being rammed for the third time of the weekend by a rival rider who was pressing to take third away from Kelly.

Meanwhile, young Canadian Dumas has proven nothing short of unstoppable over the second half of his Twins Cup campaign. On Sunday, he continued his winning streak, registering a fourth consecutive victory after leading all but a few meters of Sunday’s 14-lap race.

Dumas blasted out to the holeshot on his Suzuki SV650 and stretched an early gap. He was reeled in and momentarily passed while negotiating heavy traffic entering a section of esses, but positioned himself to retake the advantage as soon as the corner turned back from left to right.

He held the point from that point forward, storming past the checkered flag in first to claim his fifth victory in the last six races–and winning Team Hammer’s 81st AMA Pro/MotoAmerica race. He also extended his championship lead to 21 points with just one race remaining.

Dumas said, “I was able to pull an early gap, but someone caught up. I didn’t know who it was, but then we ran into lappers. He passed me on the inside when I went to the outside of the slower riders, but I passed him right back. I’m really happy–it was a great race and we’re getting really close to the championship. I just can’t thank my crew enough.”

Superbike ace Jake Lewis made it an all-around successful day for Team Hammer by scooping up his seventh top-five premier class result of the season aboard his Team M4 ECSTAR Suzuki GSX-R1000. The Kentuckian ran as high as third early before ultimately settling into a lonely ride to fifth.

Team Hammer will head to the 2019 MotoAmerica season finale at Barber Motorsports Park in Birmingham, Alabama, on September 20-22.